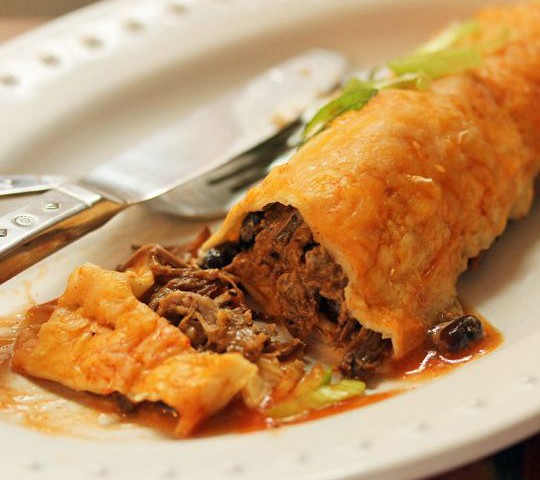 Place all of the ingredients for the beef into a 6-litre slow cooker. Cook on HIGH for 5 hours, or on LOW for 8 hours, turning the meat once or twice during the cook time.

When the meat is cooked and tender, remove it from the slow cooker to a large mixing bowl, leaving the sauce to come to a boil and reduce. While the sauce is reducing, shred the meat with two forks. Either reduce the sauce until there is just enough to moisten the shredded meat, OR thicken it with a mixture of 1 tablespoon of cornstarch mixed with 3 tablespoons of water. Pour the cornstarch solution directly into the boiling liquid in the slow cooker, and the sauce should thicken instantly.

Add the meat back into the slow cooker, and mix to combine with the sauce. Turn the cooker off, and transfer the meat to a large bowl to cool.

At this point, you can refrigerate or even freeze the meat. Or, you can continue on and make the enchiladas. (You will use only a couple of cups of the shredded meat for the enchiladas; store the rest in the refrigerator, or freeze it.)

Prepare a straight-sided 22x30cm casserole dish (or any other size dish that has straight sides), by spooning in a few tablespoons of the enchilada sauce, and spreading it to cover the bottom of the dish.

In a large mixing bowl, combine 2 cups of the shredded meat with the sour cream, black beans, and 1 cup of shredded cheese. Mix well.

On the countertop, set out the tortillas. Divide the meat and bean mixture evenly among them, placing the mixture at one end of the tortilla. Then, one at a time, roll each tortilla around the filling, and place it seam-side down in the prepared casserole dish. Pack the tortillas tightly together.

Bake, uncovered, for 25 minutes, or until the cheese has melted and browned.

Remove the enchiladas from the oven, and let sit for 5-10 minutes before serving with optional toppings.

Recipe provided by The Perfect Pantry. 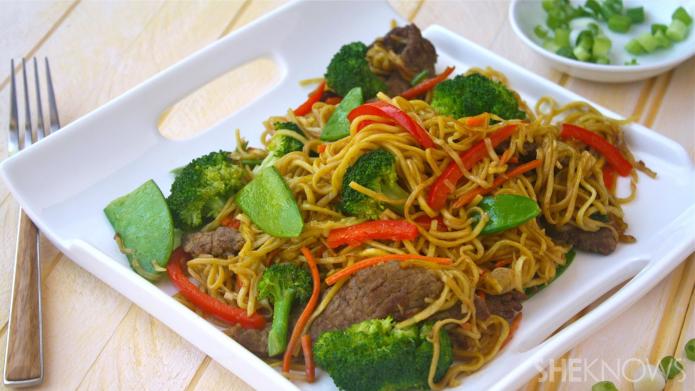