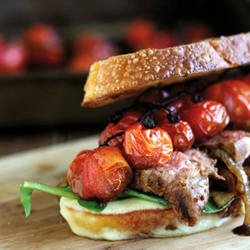 Alida Rider, aka Simply Delicious, shows us how to make her tried and tested steak sandwich recipe.

Pre-heat the oven to 220 °C. Place the tomatoes in a roasting tray and drizzle with olive oil and balsamic vinegar and season with salt.

Place in the oven and allow to roast for 15–20 minutes. Remove from the oven and set aside. Switch on the grill of your oven to toast the bread later.

In a frying pan, fry the onions until soft and translucent. Add the sugar and balsamic vinegar and allow to cook for 5–10 minutes until the onions are caramelised. Set aside.

Drizzle the steaks with olive oil and season with either steak seasoning or salt. Fry or grill in a hot pan until cooked to your preference. I only cook the steaks for 2–3 minutes per side so they are still quite rare.

Remove from the pan and allow to rest for 5–10 minutes. Before you start assembling the sandwich, drizzle the sourdough bread with olive oil and place under the hot grill until toasted on both sides.

Place the sliced mozzarella on two of the slices and place back under the grill until melted and golden.

Spread some hot English mustard on the slices of bread without mozzarella.

To assemble the sandwich, place some fresh rocket on the slice of bread with melted mozzarella, followed by the sliced steak, roasted tomatoes and caramelised onions. Top with the other slice of bread and serve. 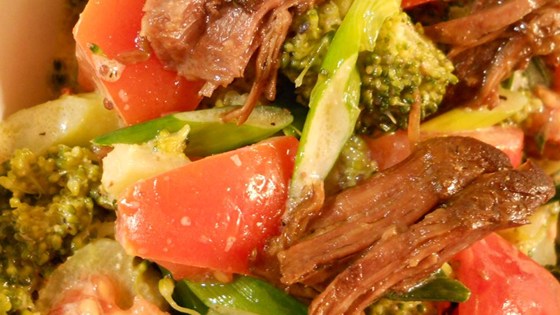